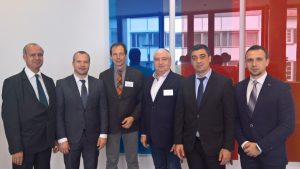 The Extended Executive Committee of the Council of Danube Cities and Regions (CoDCR) meets in Ulm. Jürgen Raizner, also director of the Steinbeis Enterprise in Romania, welcomes the mayors of 4 Romanian Danube cities. Representatives from 10 countries of Danube Region meet for 2 days in Ulm. Under the working title “SMART, SUSTAINABLE AND SOCIAL DANUBE CITIES“ members and partners of CoDCR present their ongoing Danube projects. The executive committee envisages to establishing a new institutional structure of the CoDCR until next meeting in October 2017. Dr. Batazs Seneczey, vice-mayor of Budapest, invites the members to that meeting. To him as representative of Istvan Tarlosof, lord mayor of Budapest, is handed over the presidency of CoDCR by Ulm’s lord mayor Gunter Czisch.

the 10th European Conference of the Danube Cities and Regions will be held on Tuesday, 17th  October and Wednesday, 18th  October 2017, in Budapest.

06.04.2017: The Investment Management Exhibition in Frankfurt/Germany is an unique conference and exhibition at the same time, aiming to attract Foreign Direct Investments (FDI), with a focus on PPP- Public Private Partnership and Economic free zones/industry parks.

The IME 2017 was a great opportunity for discussing Public Private Partnerships Projects, tfor marketing international projects and doing networking with global decision-makers from both the public and private sectors. 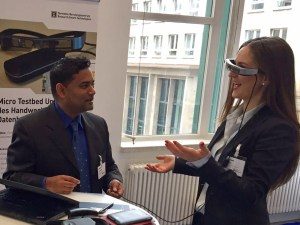 Smart manufacturing connectivity, industrial field sensors, micro test beds, industry 4.0 production performance management, communication and control for microgrid applications, data glasses – are only some of the new era subjects presented and described at the Steinbeis Engineering Day organized by the Steinbeis Foundation in Stuttgart. Steinbeis Donau Zentrum Directors Ana Turcan and Jürgen Raizner were present to get the latest information on producers and developers of the new generation products which are integrated into the industrial production market already. Once more Steinbeis has proven the top status of being a leading promoter of innovation. Through our network, we are always updated on latest technologies. This way, we make possible that the latest technologies make your life easier. Please do not hesitate in contacting us if you want to fill in the gap between you and the Industry 4.0.